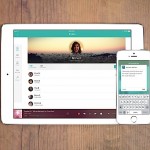 What do you do to improve a service with over 50 million active users? Why, totally revamp it of course. It sounds crazy, but that’s exactly what TuneIn, an audio service that lets you listen to podcasts and radio stations from around the world, did. Before, TuneIn was more like a directory with a search engine. Now, it’s a full-blown audio network, which CEO John Donham says is the first of its kind. “We have over a 100, 000 radio stations and millions of on-demand programs, and that’s a good experience as long as you know what you’re looking for, ” explains Donham to us. Unfortunately, however, discovering new content was a problem. There was no good indication as to what’s going on right now for all the stations that you were interested in, he said. The company launched a TuneIn Live feature some time last February to help amend the issue by letting you create a customized tile layout of favorite genres, but even that didn’t quite capture the ideal. “We wanted a way for all of your favorite stuff to accumulate for you all in one place.” In the new TuneIn interface, that one place is now your “feed.” It’s sort of like a personal radio dial that you can populate with your favorite radio stations and shows. Think of it as Twitter, but for audio. The feed will update in real-time, showing you what’s playing and if there’s a new episode to a particular podcast, thus combining live and on-demand programming in a single view. Further, just like on Twitter, each content provider can have its own TuneIn page that you can “follow” to get those updates. Some content providers, like radio stations, will list its entire repertoire of programming on their pages as well. Hundreds of brands are already on board and will have TuneIn pages ready at launch. They include ESPN Radio, NPR, the BBC, CBS Radio, The Wall Street Journal and even TV partners such as Sky News and CNN. In fact, according to Donham, TuneIn will be the only place you can listen to CNN for free. “We know that some stations, such as KQED for example, have more listeners on TuneIn than followers on Twitter and Facebook combined, ” said Kristin George, TuneIn’s VP of product. For them, she says, an audio-based network just makes more sense. To help that along, TuneIn also plans to roll out little social “Follow us on TuneIn” widgets that content providers can embed on their sites. Aside from just following brands, you can also follow other TuneIn users. Similar to Rdio and Spotify, following your buddies helps you discover what sort of programs they’re into, and vice versa. To take it a step further, you can even send “Echos” of what you’re listening to and share it with your followers or to other social networks like Twitter and Facebook. You may also follow a music genre instead of a particular station — following the indie rock category, for example, will show all of the radio stations that have just started playing a new indie song. Another key addition to TuneIn is a new Explore page that shows recommended shows, stations and genres. If you’re new to TuneIn, the page will just show what’s trending and popular. As you add more of them to your feed, however, the service will be smart enough to learn your behavior over time and will surface related content to the top. “We have all this popular content but we didn’t have a way to expose it to you, ” said George. “Explore makes it sort of like an audio Netflix.” The new TuneIn rolls out today to iOS, Android and the web.”This is a big change for us, ” said George. “We had to completely redo everything.” Now it’s time to wait and see if the gamble was worth it. Comments Source: TuneIn

Read the original post:
TuneIn tries reinventing itself as a social network for audio

CNET Pranked By Web Site’s Fake ‘All Out War’ Hack During...