How can you ensure your product design never gets knocked off? By manufacturing it with proprietary production methods and materials no one else has access to. That’s always been the government approach to making currency, which is arguably the number one thing you don’t want people knocking off. But as manufacturing techiques trickle down, and now that digital imaging has become child’s play, the design of physical currency has to continually evolve. That creates a situation essentially the opposite of what industrial design is: Currency makers have to design something that’s as complicated as possible to manufacture. This week the Federal Reserve announced that a new, redesigned $100 bill is coming out, and as you’d expect, the thing is a cornucopia of proprietary manufacturing techniques. It’s got embedded thread imprinted with “USA” and “100,” and when you hit it with a UV light the thread glows pink; it’s got the X-ray thing where a blank space on the bill reveals a hidden face (Benny Franklin) when it’s backlit; the copper-colored “100” turns green when you tilt the bill. It’s also got a “3D Security Ribbon” (that blue stripe you see) containing images of a funky bell that turns into a “100.” So where’s the 3D part? The bell/100 appear to move and shift in a 3D, holographic way while you wave the money around, as we in the Core77 offices do during our weekly dice games in the hallway with the building superintendent and the FedEx guy. (more…) 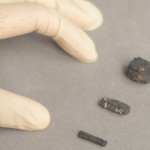