Follow this link:
Ubuntu Arrives in the Windows Store, Suse and Fedora Are Coming To the Windows Subsystem For Linux 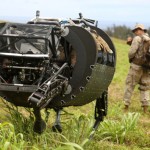 Watch an AlphaDog robot venture into (simulated) battle for the first...