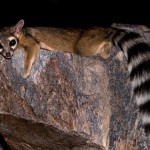 A ring-tailed cat, a type of raccoon and inspiration for Ubuntu Raring Ringtail. Wikimedia Commons Ubuntu 13.04, scheduled for release on April 25, is now available for testing in its second and final beta release. Nicknamed “Raring Ringtail,” Ubuntu 13.04 is one of the final releases that’s just for desktops and servers. By this time next year, Canonical intends to release a single version of Ubuntu targeting all form factors, including smartphones and tablets. Ubuntu developers decided to disable a tool that allows easy installation of Ubuntu alongside an existing Windows instance. Wubi, short for Windows-based Ubuntu Installer, lets users install Ubuntu on the same disk partition as a Windows instance. “Due to various bugs in Wubi that have not been addressed in time for this Final Beta, the Ubuntu team will not be releasing the Wubi installer with 13.04,” a Raring Ringtail technical overview states . “Combined with the fact that Wubi has not been updated to work with Windows 8, and the focus on mobile client over desktop, the Foundations team does not expect Wubi to be in a releasable state for 13.04.” This doesn’t mean users can’t dual-boot Windows and Ubuntu. Without Wubi, dual-booting is slightly more complicated to set up and requires separate disk partitions. Read 7 remaining paragraphs | Comments