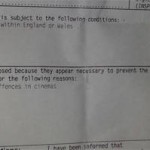 In the UK, the movie industry’s lobby group gets to requisition huge numbers of police officers to raid peoples’ houses, solely on their say-so. Here’s the story of one man who was raided by ten cops, who arrived in five cars, along with representatives from FACT (the horribly named Federation Against Copyright Theft). The FACT agents directed the arrest of a 24-year-old man, along with the seizure of all his computers and storage media, on the basis of an “emergency” search-warrant. The FACT agents conducted the bulk of his questioning at the police station, with the cops acting as stenographers. When the man was bailed, the bail sheet specified that he had been arrested for a “miscellaneous offense.” He has been banned from entering any cinemas in England or Wales as a condition of bail. As TorrentFreak notes, FACT offers cash bounties to cinema workers who disrupt people thought to be “cammers” who are recording movies in cinemas. They paid more than a dozen such bounties last year, but did not have a single successful prosecution. “This morning I was arrested at my home under suspicion of recording and distributing Fast and Furious 6 and a few other titles,” the arrested man told TorrentFreak. Mp> After seizing numerous items including three servers, a desktop computer, blank hard drives and blank media, police detained the 24-year-old and transported him to a nearby police station. Despite the ‘emergency’ nature of the raid, no movie recording equipment was found. “At the police station I was interviewed by the police together with FACT (Federation Against Copyright and Theft). During questioning they asked me about Fast and Furious 6, where I obtained a copy from and if I was the one who went and recorded it at the cinema.” Despite police involvement, as in previous cases it appears they were only present in order to gain access to the victim’s property, sit on the sidelines taking notes, and for their powers when it comes to presenting crimes for prosecution. “I was detained for 3 hrs 12 minutes, out of that I was questioned for approximately 40 minutes. One police officer and two FACT officers conducted the interview. The police officer sat back and let FACT do all the questioning, so FACT were running the show,” the man reports. Five Undercover Police Cars Sent To Arrest Single Alleged Movie Pirate [Andy/TorentFreak]

Read the original:
UK film industry requisitions cops for massive raid on suspected pirate, get to question him at police station