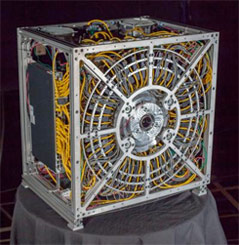 Gigapixel cameras aren’t exactly hot-off-the-presses, but a few wizards at Duke and the University of Arizona may be close to getting that sort of technology into your future point-and-shoot. Reportedly, electrical engineers with gobs of free time and an imagination the size of Coach K’s ego have managed to synchronize 98 minuscule cameras — each with a 14-megapixel sensor — “grouped around a shared spherical lens”. The real kicker here is the hope for the future: these same researchers feel that “within five years, as the electronic components of the cameras become miniaturized and more efficient, the next generation of gigapixel cameras should be available to the general public.” The prototype itself measures a whopping 2.5-feet square and 20 inches deep, but only around 3 percent of it is made of optical elements; the vast majority is circuitry needed to calculate the stupefying amount of information captured with such a device.

University researchers develop AWARE-2 camera, hope it hits the mainstream in five years originally appeared on Engadget on Thu, 21 Jun 2012 15:51:00 EDT. Please see our terms for use of feeds.