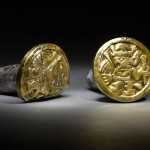 Photo: Daniel Gionnoni Archaeologists have discovered something truly stunning, the first unlooted imperial tomb of the Wari, an ancient civilization in South America that existed between 700 and 1000 A.D. The tomb, located in modern day Peru, is filled with treasures, precious artefact and – cue the ominous music – human sacrifice: Tomb robbers had long dumped rubble on the ridge. Digging through the rubble last September, Giersz and his team uncovered an ancient ceremonial room with a stone throne. Below this lay a large mysterious chamber sealed with 30 tons of loose stone fill. Giersz decided to keep digging. Inside the fill was a huge carved wooden mace. “It was a tomb marker,” says Giersz, “and we knew then that we had the main mausoleum.” As the archaeologists carefully removed the fill, they discovered rows of human bodies buried in a seated position and wrapped in poorly preserved textiles. Nearby, in three small side chambers, were the remains of three Wari queens and many of their prized possessions, including weaving tools made of gold. “So what were these first ladies doing at the imperial court? They were weaving cloth with gold instruments,” says Makowski. National Geographic Daily News has the scoop: Link

Read More:
Unlooted Tomb of the Wari is Filled with Treasures and Human Sacrifice

Synaptics builds a fingerprint reader right into its trackpads