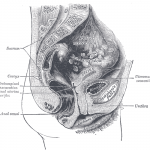 Gray’s Anatomy No, urine is not sterile, according to a study presented this week by researchers from the Stritch School of Medicine at Loyola University. Instead, the bodily excretion does contain a diverse array of bacteria that can vary depending on bladder condition. Up until now, the types of bacteria present have been hard to detect because they don’t grow in urine cultures. That urine is not sterile is not actually news; the same medical school reported findings in 2012  suggesting that urine can contain bacteria when drawn directly from the bladder. But the study may surprise many due to the deeply entrenched belief , even in the medical community, that urine is bacteria-free and thus safe to use in a number of activities, from drinking to rinsing wounds in a pinch. A commonly traded rule of thumb is that, while the initial part of a stream of urine contains bacteria washed from the urethra, the “mid-stream” is safely sterile. This is not so, or at least it’s not entirely reliable information. The two studies, from 2013 and 2012, looked only at samples from women. The 2013 study compared samples from women with and without overactive bladder disorder (OAB) and found different types of bacteria in both types of samples, including Streptococcus and Staphylococcus. The authors of the study suggested that the presence of certain types of bacteria in women with OAB could be causing their symptoms, and treating their presence could help with their condition. Read 2 remaining paragraphs | Comments

View article:
Urine and the bladder are not sterile, contain bacteria