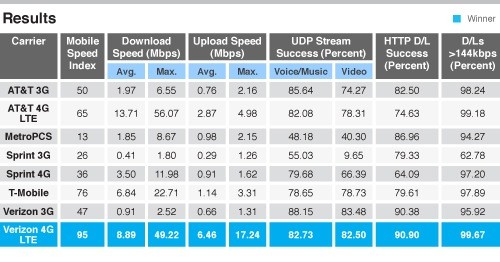 Competition for the US cellular speed crown is certainly fiercer than it was last year, when Verizon’s 4G LTE let it walk over the competition unimpeded. With AT&T’s LTE in the running, though, have the ranks changed? No, but only just barely: as PCMag discovered in its annual countrywide testing, Verizon mostly trumped its fellow telecom giant in upload speeds and reliability. AT&T could once more claim to be best in a category with the fastest downloads, although it’s counterbalanced by having a considerably smaller LTE network. For everyone outside of T-Mobile and its still very respectable HSPA+ network, it’s better luck next year. We’ll be most intrigued then, quite frankly — in addition to 2013 giving us a genuinely functional Sprint LTE network, that’s when we could see a blistering-fast T-Mobile LTE-Advanced produce an upset victory.

US 3G and 4G networks face off once more, Verizon just squeaks out win over AT&T originally appeared on Engadget on Mon, 18 Jun 2012 23:56:00 EDT. Please see our terms for use of feeds.

View post:
US 3G and 4G networks face off once more, Verizon just squeaks out win over AT&T