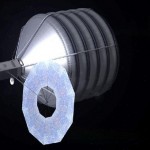 Many have lamented the seeming decline of the US space program. While we’re not expecting an immediate return to the halcyon days, the President’s proposed federal budget for fiscal 2014 could see some renewed ambition. NASA’s slice of the pie includes a plan that would improve detection of near-Earth asteroids, send a solar-powered robot ship (like the NASA concept above) to capture one of the space rocks and tow it back to a stable orbit near Earth, where researchers could study it up close. The agency would have humans setting foot on the asteroid by 2025, or even as soon as 2021. It’s a grand goal to say the least, but we’d potentially learn more about solar propulsion and defenses against asteroid collisions. If NASA’s plans mostly involve the future, the US Air Force budget is looking into the past. It’s setting aside $35 million for a long-discussed resurrection of the Deep Space Climate Observatory satellite, also known as DSCOVR — a vehicle that was scuppered in 2001 due to cost overruns, among other factors. Run by NOAA once aloft, the modernized satellite would focus on warning the Earth about incoming solar winds. That’s just one of the satellite’s original missions, but the November 2014 launch target is relatively realistic — and we’ll need it when the satellite currently fulfilling the role is overdue for a replacement. Filed under: Robots , Science Comments Via: Space.com Source: NASA , AP (Yahoo)