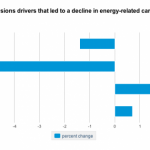 US EIA Last year, the US saw its lowest carbon emissions since 1994, continuing a downward trend that began in 2008 during the economic crisis. It marks the second year in a row that carbon emissions have dropped despite a growth in gross domestic product. Prior to the last few years, economic growth had been closely tied to increased carbon emissions. The US Energy Information Administration released the data yesterday after having taken a bit of an unwanted break during the government shutdown. In analyzing the data, it identified a variety of causes for the drop in carbon emissions. As shown above, population size and economic activity both grew last year, which would normally push emissions up. But the energy required for that economic activity dropped, and the carbon intensity of the energy supply dropped as well. Combined, those two factors more than offset the economic growth. One of the simplest factors behind the lower energy use was a relatively warm winter at the start of 2012, which lowered residential energy demand significantly. Transportation also managed to contribute. Although miles travelled held steady, the turnover in the vehicle fleet brought more energy-efficient cars onto the road, meaning that it took less fuel to do all that travel. Another contributor is the turnover in electrical generation. Coal use dropped dramatically, replaced by a combination of natural gas and wind power. A drop in manufacturing contributed to a slight drop in overall energy use. Read 2 remaining paragraphs | Comments