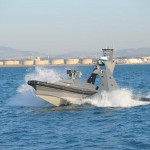 Advances in unmanned military tools and vehicles have come on leaps and bounds, but, until now, we haven’t seen a weapon firing drone operating in the seas. A recent test taking part offshore near Maryland saw several missiles launched from a new remote-controlled inflatable-hulled ship. While the Navy has used drones before for mine clearing and other defensive tasks, the small boat (similar to that pictured above) is the first experiment to involve true offensive capabilities. The almost zodiac-like craft has been an ongoing project over recent years, and contains a fully automated system which the Navy calls a “Precision Engagement Module” which uses an Mk-49 mounting with a dual missile launcher manufactured by Rafael. The hope is that such vehicles could patrol the coastline, or serve as a first defense against pirates, and other such small, fast-moving seafaring dangers. If you want to catch it in action, head past the break for the video, but don’t be fooled. While it might look like a series of misses, the Navy claims this is just a trick of the camera angle, with all six missiles apparently making contact. Continue reading US Navy tests first 11-meter missile-firing sea drone (video) Filed under: Robots , Transportation US Navy tests first 11-meter missile-firing sea drone (video) originally appeared on Engadget on Sun, 28 Oct 2012 05:18:00 EDT. Please see our terms for use of feeds . Permalink   Wired  |  Rafael  |  Email this  |  Comments