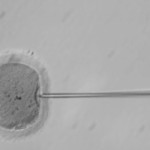 A team of scientists from Oregon have performed the first known instance of gene editing on human embryos in the US, according to MIT’s Tech Review . Shoukhrat Mitalipov from Oregon Health and Science University and his team have reportedly corrected defective genes that cause inherited diseases in “a large number of one-cell embryos” using CRISPR . Mitalipov refused to comment on the results of the project, but some of his collaborators already confirmed them to the publication. Up until now, reports about human-related gene editing usually come from outside the US. China, in particular, hasn’t been holding back when it comes to CRISPR experimentation. Scientists from the country were the first to use the technique on human embryos to repair a gene that causes fatal blood disorder. A team of oncologists from Sichuan University also conducted the first CRISPR human trial on a patient suffering from an aggressive form of lung cancer. In the US, Congress blocked clinical trials that involve genetically modifying human embryos. The practice raises a lot of ethical concerns, after all, with critics being especially worried that it could lead to designer babies. The National Academy of Sciences issued a report in early 2017 endorsing human germline modification, though, and that’s exactly what Mitalipov’s group did. Modifying an embryo to eradicate heritable diseases is called “germline engineering, ” because the child born from that embryo will pass on the changes with his or her germ (egg or sperm) cells. We won’t find out if that’s true with Mitalipov’s study, because it was never meant to be a clinical trial. The team didn’t allow the embryos to develop for more than a couple of days, and they were never meant to be implanted into a womb. What we’ve found out, however, is that it’s possible to use CRISPR to edit embryos without causing an error called “mosaicism.” In previous attempts by Chinese scientists, CRISPR caused an editing error wherein the DNA changes they made were only taken up by some, not all, of the cells the embryos developed. The Oregon group managed to avoid that problem by injecting CRISPR segments — DNA segments used to cut out unwanted genes — and sperm cells into the eggs at the same time. It’s unclear what illnesses were involved exactly, but they used sperm donated by subjects with various inheritable diseases. One of the scientists familiar with the study told Tech Review : “It is proof of principle that it can work. They significantly reduced mosaicism. I don’t think it’s the start of clinical trials yet, but it does take it further than anyone has before.” The team’s results are still pending publication, so we’ll likely hear more details about the study in the future. Source: MIT Technology Review

A series of delays and major errors led to massive Equifax...