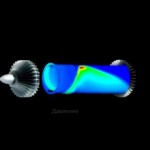 Every one of the modern US Navy’s 129 ships, and its entire fleet of aircraft, relies on gas turbines for either basic propulsion or to generate electricity for their critical systems—typically both. But as fuel costs continue to rise, these turbines now burn through nearly $2 billion of fuel annually. That’s why the Naval Research Lab is developing a revolutionary new type of engine that could reduce our armada’s energy consumption by as much as 25 percent (and save $400 million a year) even as the Navy transitions to “all electric” propulsion systems. More »