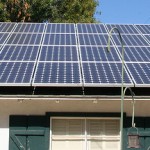 Utility companies across America are fighting solar , imposing high fees on homeowners who install their own solar panels to feed back into the grid. This one was predictable from a long, long way out — energy companies being that special horror-burrito made from a core of hot, chewy greed wrapped in a fluffy blanket of regulatory protection, fixed in their belief that they have the right to profit from all power used, whether or not their supply it. Bruce Sterling once proposed that Americans should be encouraged to drive much larger trucks, big enough to house monster fuel-cells that are kept supplied with hydrogen by decentralized windmill and solar installations — when they are receiving more power than is immediately needed, they use the surplus to electrolyze water and store the hydrogen in any handy nearby monster-trucks’ cells. When the wind isn’t blowing or the sun isn’t shining, you just plug your house into your enormous American-Dream-mobile — no need for a two-way grid. This solution wasn’t just great because it aligned the core American value of driving really large cars with environmental protection, but also because it was less vulnerable to sabotage from hydrocarbon-addicted energy companies. HECO, despite criticism from Hawaii’s solar industry, denies the moratorium is anything more than an honest effort to address the technical challenges of integrating the solar flooding onto its grid. The slowdown comes in a state where 9 percent of the utility’s residential customers on Oahu are already generating most of their power from the sun and where connections have doubled yearly since 2008. In California, where solar already powers the equivalent of 626,000 homes, utilities continue to aggressively push for grid fees that would add about $120 a year to rooftop users’ bills and, solar advocates say, slow down solar adoptions. Similar skirmishes have broken out in as many as a dozen of the 43 states that have adopted net-metering policies as part of their push to promote renewable energy. In Colorado, Xcel Energy Inc. has proposed cutting the payments it makes for excess power generated by customers by about half, because it says higher payouts result in an unfair subsidy to solar users. Utilities Feeling Rooftop Solar Heat Start Fighting Back [Mark Chediak, Christopher Martin and Ken Wells/Bloomberg] ( via /. ) ( Image: Solar Panels All Done! , a Creative Commons Attribution (2.0) image from clownfish’s photostream )