Enlarge (credit: Matthew Stevens ) Verizon will start offering a 750Mbps Internet package for $150 a month in parts of its FiOS fiber-to-the-home territory, the company announced today. “FiOS Instant Internet” with symmetrical upload and download speeds of 750Mbps will launch Saturday “to nearly seven million homes and businesses in greater New York City/northern New Jersey, Philadelphia and Richmond, [Virginia] with more to follow in 2017,” Verizon’s announcement said. The Boston and Norfolk, Virginia markets will get the new speed tier later in the first quarter, the company said. This is an improvement over the top speed tiers currently advertised on the FiOS website , which lists 300Mbps for $170 a month and 500Mbps for $270, plus taxes, equipment charges, and other fees. Those are promotional prices that last only a year before increasing. Read 8 remaining paragraphs | Comments 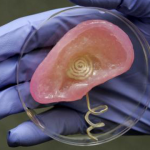 A 3D printed cybernetic ear that even a transhumanist would love