The Nexus 7 arriving on Verizon Wireless apparently isn’t the carrier’s only big news this week. @VZWnews just tweeted that “#More is coming, ” teasing an announcement for tomorrow. According to our tipster, Verizon will launch so-called More Everything plans with additional data and reduced prices for Edge customers. Plans with 8GB or less of data will be discounted $10, while those with 10 gigs or more will be reduced by $20. For those unfamiliar, Edge is Verizon’s trade-in and upgrade program, which lets you pay off the cost of a phone over the course of your two-year contract. Share Everything plans will reportedly become the new More Everything plans, and they’ll get a boost in data caps in the process. Those plans will also allow for unlimited messaging to anywhere in the world from the US. Finally, More Everything plans will apparently include 25GB of free cloud storage. We’re hardly the first to say it, but it certainly looks like the carrier is feeling the heat from T-Mobile and others competing for customers with increasingly ambitious offers. We’ll have #More details on the announcement tomorrow, so keep an eye out! [Thanks, anonymous!] Filed under: Cellphones , Networking , Mobile , Verizon Comments Via: Android Police Source: Verizon Wireless (Twitter) 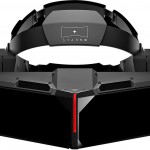 Starbreeze deal gives you more freedom to move in VR