On The Disney Blog, John Frost describes the upcoming rule-tightening for FastPasses in Walt Disney World. FastPass is a ride reservation system: park visitors visit a ride, feed their entry ticket to a kiosk, and it spits out a coupon that can be redeemed later in the day for admission via a shorter queue. Until now, FastPass expiry times were not enforced (that is, the pass might say it was good for 3-4PM, but you could use it any time after 3), which led people like me to collect FastPasses all morning (you can get one every hour or so) when the lines were short, and then use them all in a bunch in the afternoon when the lines got longer.

Frost says the rule change is a precursor to a much more dramatic change, a FastPass replacement (?) called xPass, which allows visitors to reserve their ride-times far in advance, over the Web, simultaneous with their other bookings — dining, hotel, etc. This feels like it would suck a lot of spontaneity out of Disney World visits, though for certain very slow-loading/long-queueing rides, it would be nice to guarantee a ride in advance.

Meanwhile, Frost has some excellent suggestions for ways to fine-tune the new FastPass system: 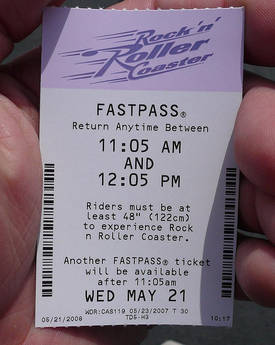 Here are a few tweaks I would like Disney to do to improve the FastPass system a bit.

* More surprise fastpasses. Standby queue dropping below 15 minutes? Send a digital fastpass to guests on their mobile phones.
* Shorten the wait time required to get an additional fast pass later in the day.
* Let guests pick their return window. Maybe just morning, afternoon, or night. But at least that way you have an option if you arrive at a fastpass machine only to find out you have an restaurant reservation scheduled for that same time.
* Allow locals to get a digital fast pass for one ride from home the night before. Make it for afternoon or peak dining times only. This solves the having to show up at the crack of dawn problem.
* Rides with a through-put of more than 2000 guests an hour should not have fastpass. Instead move those machines to spinners and other low capacity attractions.
* Display publicly the number of fastpasses that can be redeemed an hour. Perhaps as a % of the standby queue. This will help guests decide if they need to get a Fastpass for the attraction or not.
* Limit the number of Fastpass that can be issued before 11AM to 50% of the day’s fastpasses. This saves some Fastpass capacity for guests who arrive later in the day