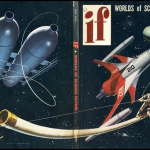 The Entire Run Of IF Magazine Is Now Freely Available Online!