An anonymous reader writes: Phil Plait reports on new research into exoplanets that came to an unexpected and non-obvious conclusion. Throughout the galaxy, astronomers have been finding exoplanets they call “warm Neptunes” — bodies about the size of Neptune, but which orbit their parent star more closely than Mercury orbits the Sun. When astronomers looked at spectra for these planets, they found something surprising: no methane signature (PDF). Methane is made of carbon and hydrogen, and it’s generally assumed that most large, gaseous planets will have a lot of hydrogen. But this class of exoplanet, being significantly smaller than, say, Jupiter, may not have the mass (and thus the gravity) to hold on to its hydrogen when it’s heated by the close proximity to the star. The result is that the atmosphere may be largely made up of helium instead. If so, the planet would look oddly colorless to our eyes, very unlike the planets in our solar system. Read more of this story at Slashdot.

Read More:
‘Warm Neptune’ Exoplanets May Have Lots of Helium 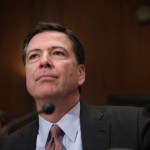 The FBI wants access to your encrypted phone data