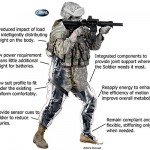 The US military’s dabbled with full-on robotic suits in the past, but it’s now looking at a less convoluted , more energy-efficient approach. A project called Warrior Web from DARPA aims to enhance soldier carrying capacity and minimize injuries by distributing loads better, providing better joint support and “reapply(ing) energy to enhance motion.” Such a suit would be equipped with sensors to detect forces, and be able to fit beneath existing uniforms while consuming only 100W of juice. The US Army has nearly completed five months of prototype testing using a multi-camera motion capture system (see the video after the break) to develop critical tech. The next step will be to design and fabricate a suit ready for real-world testing, which should happen in the fall — assuming the program keeps its footing. Filed under: Wearables , Science Comments Source: DARPA