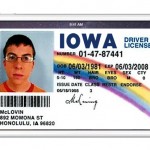 Iowa Is Going To Let You Use a Smartphone As Your...