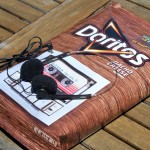 Junk food and summer blockbusters go hand in hand — from the nachos, popcorn and candy you buy at the cinema, to action-hero faces plastered on every brand of potato chips at the supermarket. This has been the way of the world as long as I can remember, but this summer, the pairing may have reached its apex. In a perfect storm of brand synergy, nostalgia and guilty pleasures, Marvel has decided to release the soundtrack to ‘Guardians of the Galaxy Vol. 2’ in the most unconventional format imaginable: a bag of Nacho Cheese Doritos . Like Frito-Lay’s last “smart bag, ” the album-in-a-Doritos-bag gimmick is a bizarre, yet weirdly delightful marketing mess. The film’s soundtrack isn’t hidden in the bag as a CD or thumb drive, nor is it a redemption code for iTunes or Google Play — the album is literally built into the Doritos bag as a faux-cassette player, complete with a headphone jack, buttons to play, rewind, fast-forward, change volume or stop and a mini-USB port to recharge. Again — this is a bag of tortilla chips that you can recharge. The moment new of this absurd product tie-in reached Engadget, our team had questions. Does it sound any good? Can you transfer the music to your phone? If you tear the bag apart, are you rewarded with a halfway decent media player? We resolved to track down a bag, destroy it, and find out. You can tell at a glance that the ‘Guardians of the Galaxy’ Doritos aren’t your typical bag of snack chips. For one, the bag itself comes in a display box decorated to look like a vintage stereo, with printed dials and a window peeking through to the bag’s embedded media player. Inside the box are instructions (plug in headphones and turn it on, of course) and an extremely cheap headset reminiscent of 1990s “walkman style” stereo cans with a thin metal headband and flimsy, foam-covered speakers. While the headphones do look a lot like the pair Chris Pratt wore in the original Guardians movie, they put out decidedly low fidelity sound. Maybe it’s an intentional nod to the MP3 player’s facade: cassette tapes never sounded that great anyway . Either way, the bag’s music player doesn’t need cheap headphones to be mediocre. The ports on ours were so misaligned that we actually couldn’t get the headphones to plug in until we opened the bag and shuffled around the internals. When we finally got the audio port lined up, it worked well enough to fulfill its novelty — but the music was a little distorted, even on good headphones. Fortunately, this is the fault of Doritos’ cheap media player, not the music itself: plugging the bag’s mini-USB charging cable into a PC will let you download the entire album as DRM-free MP3 files encoded at 320kbps. The novelty of asking someone if they want to listen to music from a snack bag is worth a few laughs, but at $29.99, this is probably the worst way to buy the film’s soundtrack. Getting the music files out of the bag is a bit of a chore, and tearing it apart to get at the electronics doesn’t yield much of a reward — the Doritos MP3 player is little more than a cheap, exposed circuit board sandwiched between two pieces of foam. Without the snack bag, its buttons are too tall and awkward, the audio port is exposed and flimsy and it has no visible user interface to speak of. It’s not even worth pillaging for the player’s microSD card , which holds a paltry 256MB of data. Looks like we destroyed the eBay value of this season’s most ridiculous collector’s item for nothing.

More:
We destroyed a collectible Doritos bag to get at its hidden MP3 Player