HughPickens.com writes: For many drivers, the app Waze is a godsend, providing real-time, crowdsourced traffic tips to motorists desperate for alternatives to congested thoroughfares but to some residents of the formerly quiet neighborhoods through which Waze has rerouted countless commuters, the app has destroyed their quality of life. Steve Hendrix writes at the Washington Post that when traffic on Timothy Connor’s quiet Maryland street in Tamoka Park, MD suddenly jumped by several hundred cars an hour, he knew that Waze was to blame for routing cars around a months-long road repair through his neighborhood. “I could see them looking down at their phones, ” says Connor. “We had traffic jams, people were honking. It was pretty harrowing.” So Connor became a Waze Warrior. Every rush hour, he went on the Google-owned social-media app and posted false reports of a wreck, speed trap or other blockage on his street, hoping to deflect some of the flow. Neighbors filed false reports of blockages, sometimes with multiple users reporting the same issue to boost their credibility. “It used to be that only locals knew all the cut-through routes, but Google Maps and Waze are letting everyone know, ” says Bates Mattison. “In some extreme cases, we have to address it to preserve the sanctity of a residential neighborhood.” But Waze was way ahead of them. It’s not possible to fool the system for long, according to Waze officials. For one thing, the system knows if you’re not actually in motion. More importantly, it constantly self-corrects, based on data from other drivers. “The nature of crowdsourcing is that if you put in a fake accident, the next 10 people are going to report that it’s not there, ” says Julie Mossler, Waze’s head of communications. The company will suspend users they suspect of “tampering with the map.” Read more of this story at Slashdot.

Number of Births in Japan To Hit Record Low in 2017 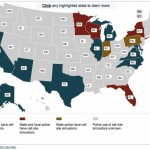 Local cops in 15 US states confirmed to use cell tracking...