A Wired/Jalopnik post details the sad history of the Schienenzeppelin, a Weimar-era German “rail zeppelin” that used a giant prop to pull itself down the railroad tracks: Conceived and built in 1930 by the German rail company Deutsche Reichsbahn, the Schienenzeppelin was a design alternative to the streamlined steam locomotives of its day. It was a slick and relatively lightweight at 20 tons, running on but two axles and powered by a 46-liter BMW V-12. 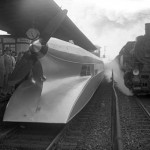