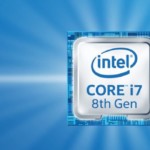 Intel’s 8th-generation “Coffee Lake” CPUs are now on the market. These chips come with a modest bump in CPU frequency, but the big news is that Intel is finally adding 6-core processors to its mainstream i7 and i5 lines. More cores means these chips will perform better at tasks that benefit from multithreading, such as content creation and data processing, and the increase in frequency and cores will give a boost to gaming frame rates. Intel used to release chips on a “tick-tock” cycle that saw every release alternate either a new design, or a new manufacturing process – called a “node.” A new process node, like moving from 45nm to 22nm, means smaller transistors and a faster or more power-efficient chip. But manufacturing challenges made tick-tock falter a few years ago, and now new releases are much harder to predict. “Coffee Lake” is the fourth chip Intel has released at 14nm, and the third based on the “Skylake” design from 2015. New designs and nodes are coming, but we’ll probably have to wait until they arrive in 2018 to see a big jump in performance.