The tale of the late-night Wheel of Time pilot that aired in a paid infomercial slot on FXX has taken another odd turn. Producers Red Eagle Entertainment LLC and Manetheren LLC have filed a lawsuit in the United States District Court for central California against Harriet McDougal (widow of James Rigney, who wrote the Wheel of Time novels under the pen name Robert Jordan), her company, Bandersnatch Group Inc., and twenty unnamed other persons (“Does 1-20”). The suit alleges that McDougal’s statements about her lack of involvement in the pilot’s production constitute breach of contract, slander, and interference with contractual relations and prospective economic relations; the suit demands declaratory relief and a jury trial. With the pilot coming essentially out of nowhere and airing with no fanfare, very few fans of the series were even aware of its existence until after the fact; it was clear that the production was accomplished in very little time and on a minimal budget. The resulting effort (titled “Winter Dragon”) did not resemble the series prologue very closely, and it quickly drew strong rebuke from McDougal, who claimed the pilot was made “without my knowledge or cooperation,” and that no one from Robert Jordan’s estate has been involved in any way with it. McDougal claims that Universal currently holds the rights to the Wheel of Time TV series, not Red Eagle Entertainment, and that the pilot made no mention of Universal or her own company, the Bandersnatch Group. That statement was apparently interpreted by Red Eagle Entertainment LLC—the corporate entity that produced the pilot and also claims to hold the television rights to The Wheel of Time —as fighting words. Read 4 remaining paragraphs | Comments 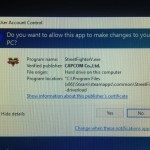 Street Fighter V will roll back request for kernel access on...