An anonymous reader writes: Wired has a profile of Spanish company Vortex Bladeless and their unusual new wind turbine tech. “Their idea is the Vortex, a bladeless wind turbine that looks like a giant rolled joint shooting into the sky. The Vortex has the same goals as conventional wind turbines: To turn breezes into kinetic energy that can be used as electricity.” Instead of relying on wind to push a propeller in a circular motion, these turbines rely on vorticity — how wind can strike an object in a particular way to generate spinning vortices of air. Engineers usually try to avoid this — it’s what brought down the Tacoma Narrows Bridge. But this Spanish company designed the turbine computationally to have the vortices occur at the same time along its entire height. “In its current prototype, the elongated cone is made from a composite of fiberglass and carbon fiber, which allows the mast to vibrate as much as possible (an increase in mass reduces natural frequency). At the base of the cone are two rings of repelling magnets, which act as a sort of nonelectrical motor. When the cone oscillates one way, the repelling magnets pull it in the other direction, like a slight nudge to boost the mast’s movement regardless of wind speed. This kinetic energy is then converted into electricity via an alternator that multiplies the frequency of the mast’s oscillation to improve the energy-gathering efficiency.” Read more of this story at Slashdot. 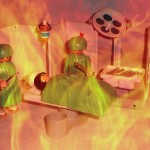