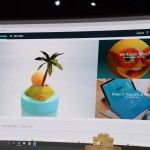 Windows 10 users won’t have to wait much longer to get their hands on Paint 3D . Microsoft announced today that the upcoming Creators Update for the OS will be available starting on April 11th. As usual, though, Microsoft is staggering the rollout so it doesn’t inundate every Windows user (and its servers) at once. Windows 10 desktop users will have their go at it first, and afterwards it’ll head to laptops and mobile devices. The Creators Update is a big deal for a few reasons: It’ll introduce Paint 3D, Microsoft’s new 3D creation app that’s simple enough for children to use. And it packs in some useful new features like Game Mode , which devotes more system resources to games, ensuring better overall performance. There are also some helpful Edge upgrades , like the ability to preview tabs and file away collections of tabs for later use. The Creators Update won’t make Windows 10 look much different, but it should hopefully make it a much more useful OS.