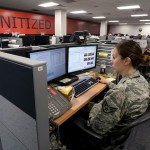 US reportedly elevates the role of Cyber Command