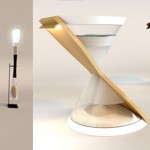 Sand Can Light Up A Room