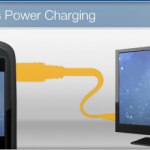 Get 4K video from your phone’s USB port with the new...