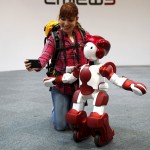 Hitachi’s answer to Pepper the robot is swifter and sturdier