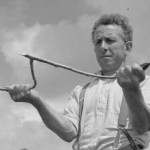 HPE Unveils The Machine, a Single-Memory Computer Capable of Addressing 160...