The Wheel of Time series is one step closer to your... 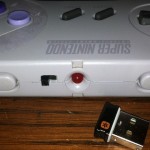 Hack Wireless Into a SNES Controller with a Logitech Receiver