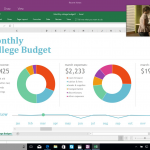 Microsoft just made it easier to use multiple applications at once on Windows 10 , especially when dealing with video-focused programs. The company released Windows 10 Insider Preview Build 15031 to developers today, and the main attraction is the introduction of so-called Compact Overlay windows. The new feature allows users to run a program in a small window that’s pinned above other applications, so it can be seen without being as intrusive as a standard window. Compact Overlay windows appears useful when dealing with video. For example, keeping a YouTube clip or Skype call visible in the corner would make it easier for users to do things like take notes or check email while not losing sight of the video. The good news for developers is that Compact Overlay windows “work just like normal windows in all other ways, ” so it should be relatively painless to adapt existing programs to be compatible with the feature. It’s unclear if Compact Overlay windows can be resized or used with Snap (a feature just pulled from Xbox One ). We’ve asked Microsoft to clarify. The update also adds full-screen Game Bar support for 52 games, including Call of Duty and Grand Theft Auto titles. Microsoft isn’t the only company dabbling in picture-in-picture modes. Apple last year debuted a similar feature for MacOS , which works in much the same way, but is only compatible with Safari and iTunes. Compact Overlay windows are only available to developers at the moment, although Microsoft says that the Skype Preview and Movies & TV apps will soon be updated to take advantage of the new feature. Source: Windows

Read the original:
Windows 10 is getting a picture-in-picture mode

What a Bump Stock Does, and Why People Want Them