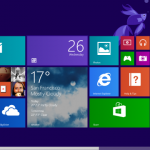 During its Worldwide Partner Conference in a rainy and humid Houston today, Windows CFO Tami Reller announced that Windows 8.1, the free update to Windows 8, will be made available to OEMs by “late August, ” with devices reaching the market by the holiday season. Windows 8 was released to manufacturing on August 1, 2012. Microsoft is promoting a faster release cadence across its entire range of products, and Windows 8.1 is arguably the first mass-market consumer product from the company that will benefit from this new release schedule. Read on Ars Technica | Comments

Super Bowl XLVIII will be streamed for free on Fox Sports...