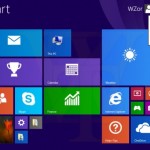 Microsoft’s incoming Windows 8.1 update might not make any grandiose changes, but it looks as if it will offer some appreciated navigation and start-up improvements. A new build has leaked online offering risky types the chance to try it several weeks before the official release. As teased last month , the update will let you pin your Windows Store apps alongside other programs on your desktop start bar. It sounds like a timesaving improvement, as before you’d have to labor through the Start screen to launch those aforementioned apps. Windows 8-styled apps also pick up a new bar with close, minimize and snap options available to click on, forgoing those keyboard shortcuts or touch swipes. Live Tiles now have contextual menus available with a right click, making them easier to resize, move (or remove). A new shutdown button, as leaked just last week , also throws up a new drop-down menu for restarting, shutting down and sleep mode. This experimental build is apparently three weeks old already — the real deal is expected to arrive next month. Filed under: Desktops , Laptops , Software , Microsoft Comments Source: The Verge