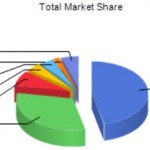 Web traffic for a major new operating system typically grows at a consistently faster pace than its predecessor. That’s not true for Windows 8, however — NetApplications now estimates that Windows 7 outpaced its newer counterpart for the first time in September. While Windows 8 did grow to a symbolic 8 percent of web use last month, its ancestor grew slightly faster, hitting 46.4 percent. We wouldn’t necessarily say that Windows 8 is in trouble based on these figures, though. The rise in Windows 7 use corresponds to a drop for Windows XP (shown after the break), which suggests that corporate customers are in the midst of upgrades; they’re less likely to choose a young OS. Microsoft still faces long-term problems, but they’re more likely to stem from customers’ shift toward mobile devices and away from PCs. Filed under: Internet , Software , Apple , Microsoft Comments Via: The Next Web Source: Net Applications