Microsoft marketing chief Tami Reller announced that the company has sold 200 million Windows 8 licenses in the 15 or so months that it has been on the market. This number includes only OEM and retail copies of the operating system and excludes volume licenses. The company previously announced that Windows 8 had reached 100 million copies sold in May of last year, a rate of sales that matched Windows 7. That operating system, however, reached 240 million sales within the first 12 months, demonstrating that Windows 8 is clearly not selling as fast. Still, in a PC market that’s shrinking—and which started shrinking even before the release of Windows 8—200 million copies is perhaps not too shabby. PCs as a whole are not selling as fast as they were during Windows 7’s heyday, and both Windows and Office are suffering as a result. Read 1 remaining paragraphs | Comments 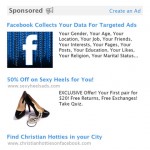 How Facebook Uses Your Data to Target Ads, Even Offline