An anonymous reader writes “Earlier this week, reports surfaced that the Windows RT operating system had been jailbroken to allow for the execution of unsigned ARM desktop applications. Microsoft quickly issued a statement saying it does not consider the findings to be part of a security vulnerability, and applauded the hacker for his ingenuity. Now, a Windows RT jailbreak tool has been released.” Read more of this story at Slashdot. 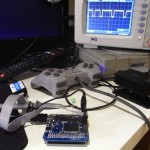 PSIO prototype loads PlayStation 1 ISOs on the console, no burned...