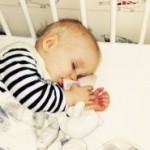 App sings babies back to sleep in their parent’s voice