Bill Gates shows us the future drinking a glass of water... 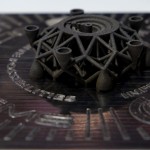 This is the first object 3D-printed from alien metal