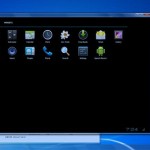 Sure, you could enjoy Android on your PC through dual-booting or virtualization , but the folks at Socketeq have whipped up yet another alternative: a port of Mountain View’s mobile OS, fittingly dubbed WindowsAndroid, that runs natively on the Windows kernel (under Vista, 7 and 8) instead of Linux. Not only does the operating system run speedily since its free of virtualization chains, but it serves up the appropriate tablet or smartphone UI based on window size, and plays nice with keyboards and mice, to boot. Socketeq’s solution serves up the full Android experience, but you’ll have to separately flash the Google apps that typically come baked in, according to Android Police . Ice Cream Sandwich is the freshest flavor of Android to have undergone the kernel-replacement treatment, and it’s currently being offered as a free “first-try” download at the source. Filed under: Cellphones , Desktops , Tablets , Microsoft , Google Comments Via: Android Police Source: Socketeq