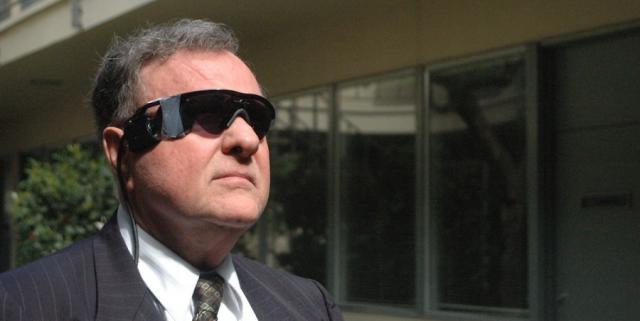 Enlarge / Prototypes of goggle-implant systems are already being tested.
Stanford.edu

In some forms of blindness, including age-related macular degeneration, most of the eye is perfectly fine. The cells of the retinal that convert light into electrical pulses may die off, but the cells that support them, including the nerves that process these signals and relay them to the brain, are still intact. This raises the prospect that the eye’s infrastructure can be used to help restore vision. Stimulate the remaining neurons in response to light, and they’ll happily take the signals and feed them into the visual centers of the brain.

There are a number of ways of going about this, but one of the more promising is some form of retinal implant. These devices can take incoming light, convert it into an electrical signal, and feed that directly into the neurons within the retina. The problem right now is that these things are bulky and complex, requiring wires, external power sources, and the like. In this week’s Nature Photonics, researchers report on a novel method to get rid of some of the complexity: implant a photovoltaic device directly into the retina.

This doesn’t entirely eliminate the complexity, but it makes the most important parts—the ones that reside inside the retina—significantly simpler. It also eliminates their need for an external power source. The idea is appealingly easy. Photovoltaic devices work by converting light energy into free electrons, producing a current. By injecting that current into the appropriate layer of the eye, it’s possible to use it to stimulate the nerves that were normally receiving signals from the retina’s light-receptive cells.