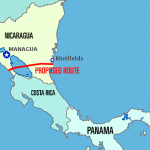 Wired’s Greg Miller takes a look at the huge risks involved in digging enormous, container-ship size canals . There are many lingering questions. How HKND–apparently the only company to submit a bid–managed to land the deal, isn’t clear, leaving many Nicaraguans frustrated by their government’s lack of transparency. … Exactly where the money to build the canal will come from is another mystery, as is the role, if any, the Chinese government will play. Wang Jing has denied that the government is involved in the project, as have government officials. But some analysts suspect otherwise. … Nor has any assessment of the environmental impacts of the project.