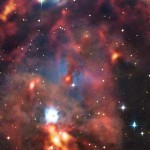 The “ultimate” building blocks of life have been found in interstellar...