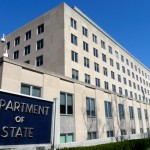 State Department shuts down unclassified email to cope with hack