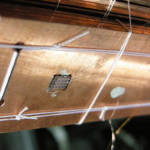 How do you find out what happens to physics near absolute zero (aka 0 kelvin), the temperature where particle motion virtually stops? Scientists at the University of Basel might have just the device to do it. They’ve developed a nanoelectronics chip that they can successfully cool to a record-setting, bitterly cold 2.8 millikelvin. The trick involved a clever use of magnetic fields to eliminate virtually all sources of heat. The team started by using magnetic cooling (where you ramp down an applied magnetic field) to lower all the chip’s electrical connections down to 150 microkelvin. After that, they integrated another, specially constructed magnetic field system that let the researchers cool a Couloumb blockade thermometer — yes, even a thermometer’s heat is problematic when you’re edging close to absolute zero. It was successful enough that the chip could stay cold for 7 hours, which is plenty of time for tests. This is about more than bragging rights, of course. A chip that can run in such frigid conditions could help understand physics at its very limit. You might see strange behavior, for instance. It could also be helpful in creating ideal conditions for quantum physics experiments. And there’s still some room for improvement, to boot. The scientists are “optimistic” they can refine their method to lower the overall temperature to an even chillier 1 millikelvin. Via: Electronics 360 Source: University of Basel 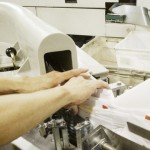 How the Post Office Sniffs Out Anthrax Before It Hits Your...

BlackBerry Just Killed the Greatest Thing It Ever Made