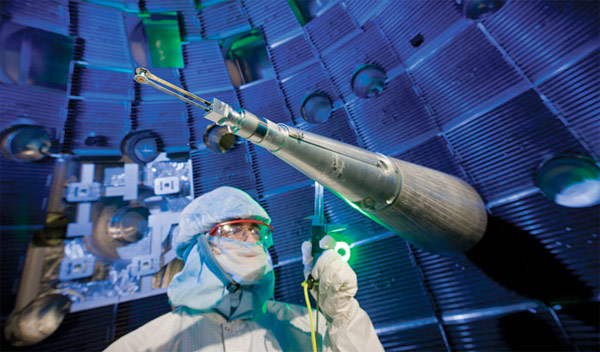 The Wolverines may have concocted the “most intense” laser in the universe back in ’08, but it’s a group of grinners at the National Ignition Facility in Livermore, California that can now lay claim to firing the planet’s first two-megajoule ultraviolet laser. Earlier this week, a 1.875-megajoule shot was fired into the target chamber, but it broke the two-dot-oh barrier after passing through the final focusing lens. Reportedly, this matters for more than just bragging rights, as scientists have long since sought to get past ‘ignition’ in order to “coax fusion energy from a tiny frozen fuel pellet.” If we had to guess, we’d say both Nerf and Mattel are somehow trying to commercialize this thing prior to the holidays. (And yeah, we hope they’re successful.)

World’s first two-megajoule ultraviolet laser fired in California: no, you can’t buy one originally appeared on Engadget on Wed, 21 Mar 2012 17:13:00 EDT. Please see our terms for use of feeds.

Taken from:
World’s first two-megajoule ultraviolet laser fired in California: no, you can’t buy one